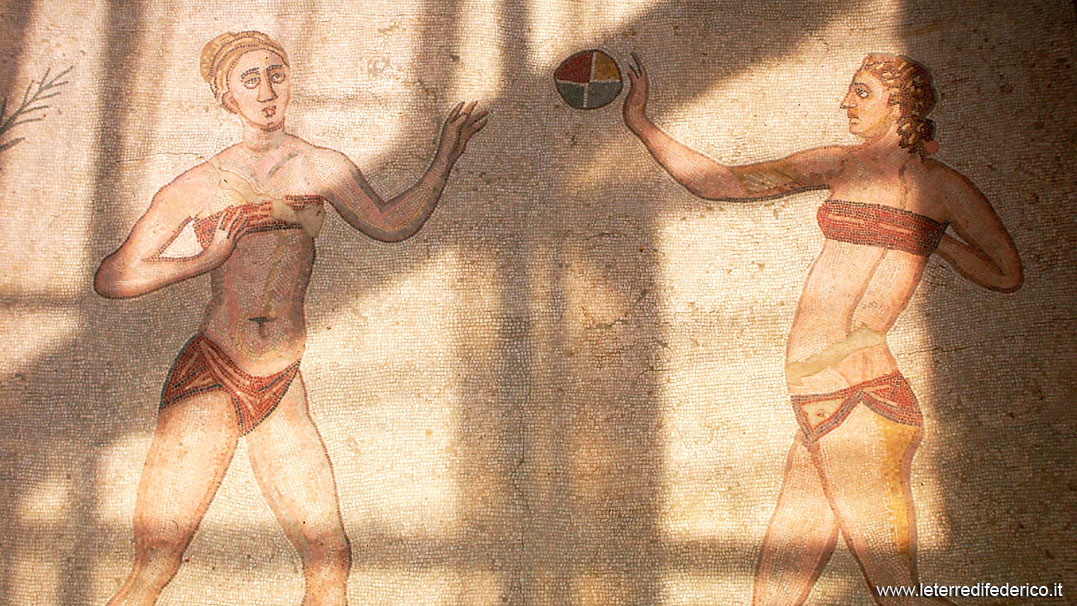 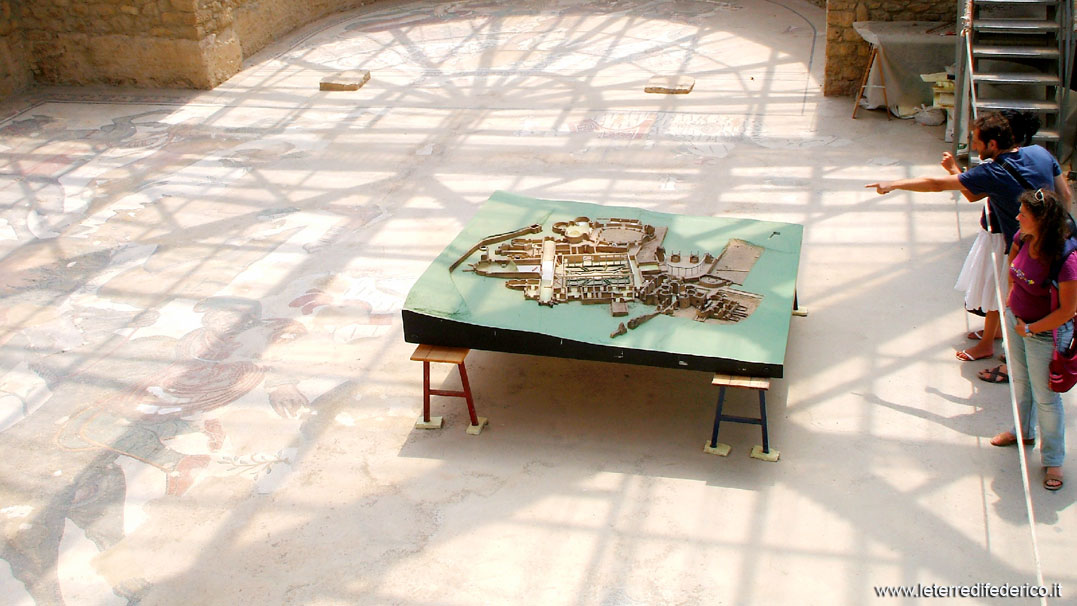 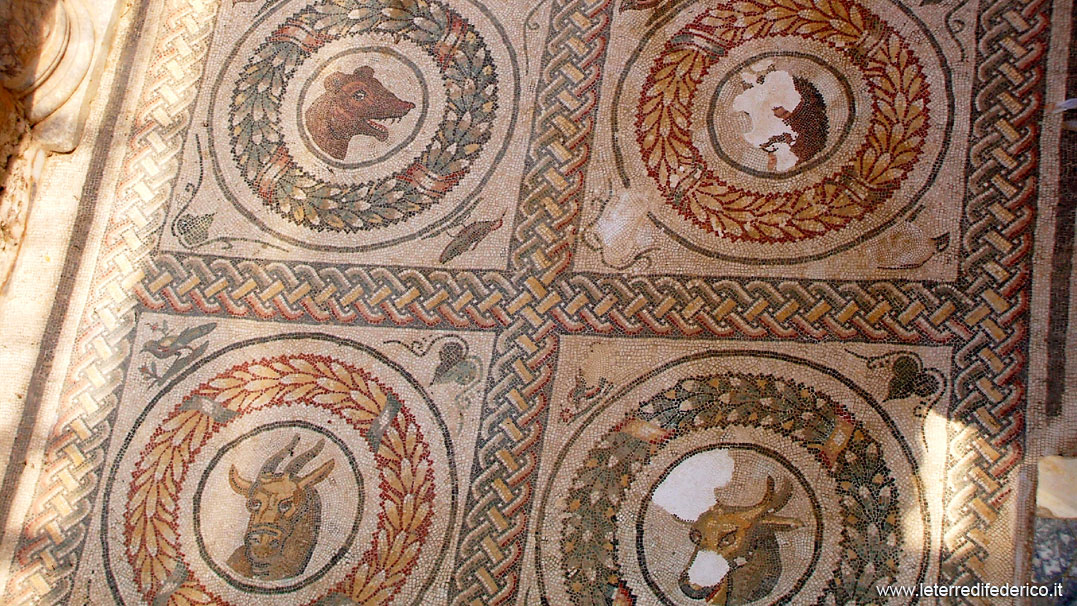 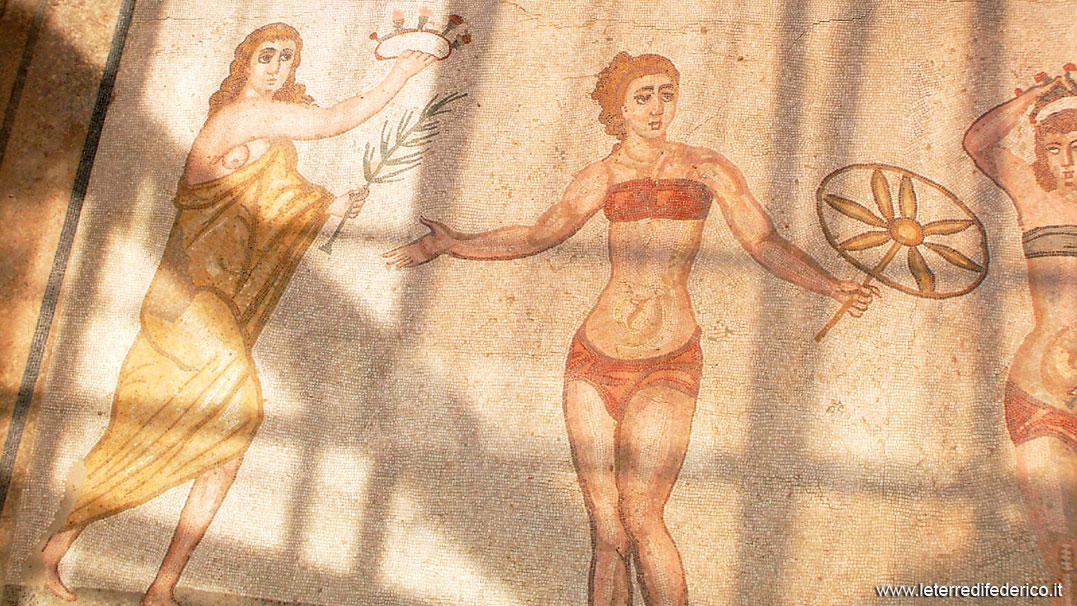 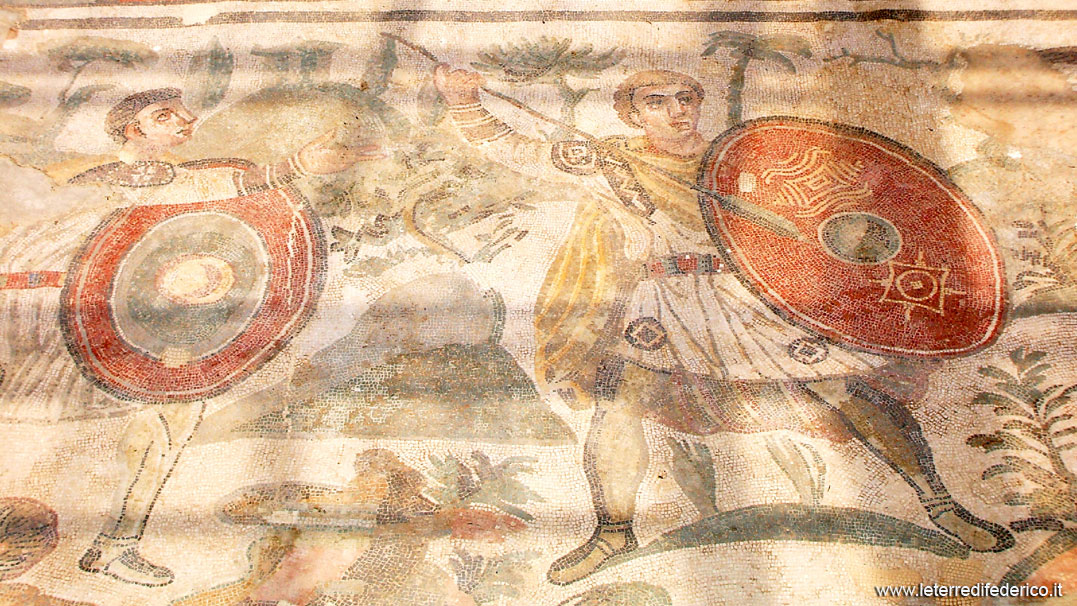 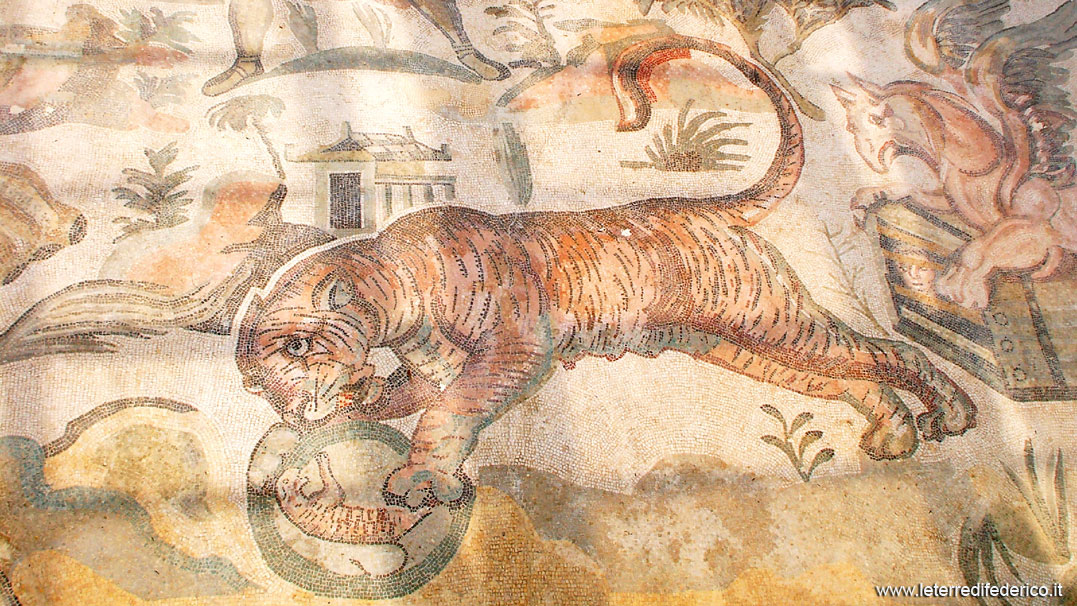 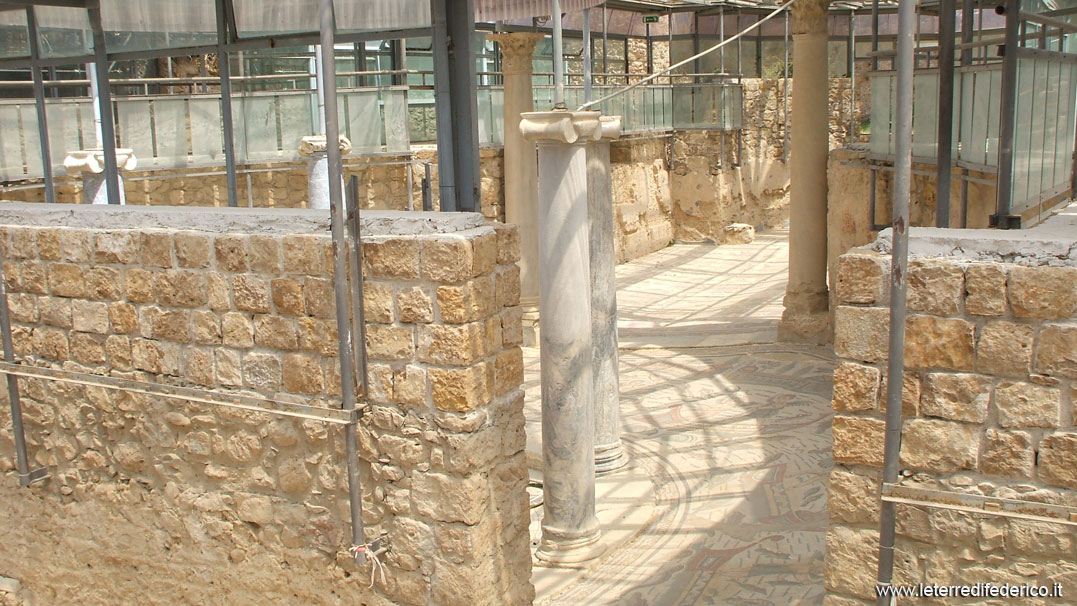 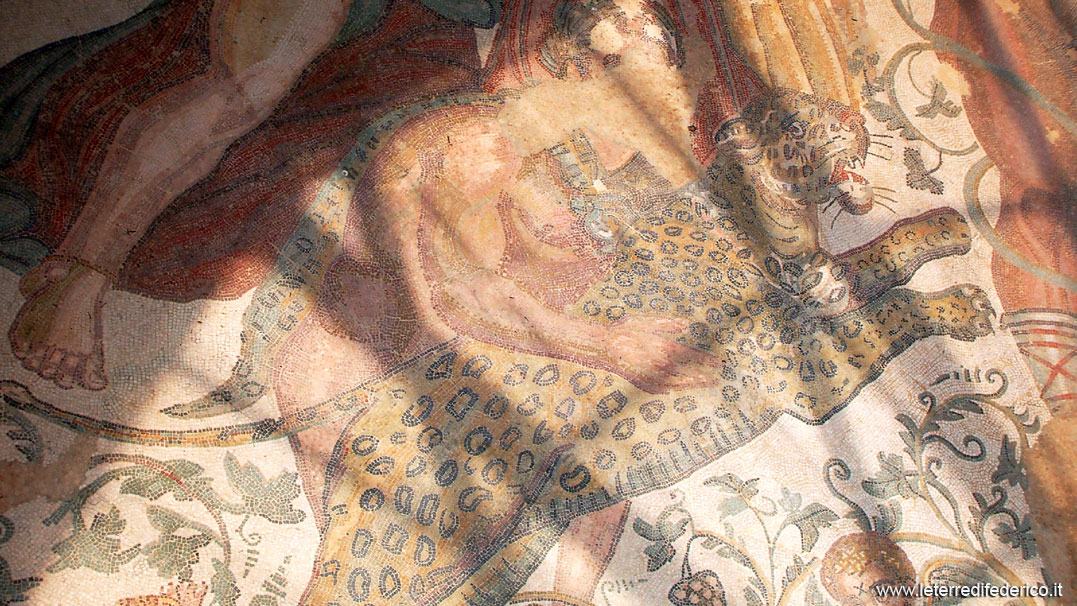 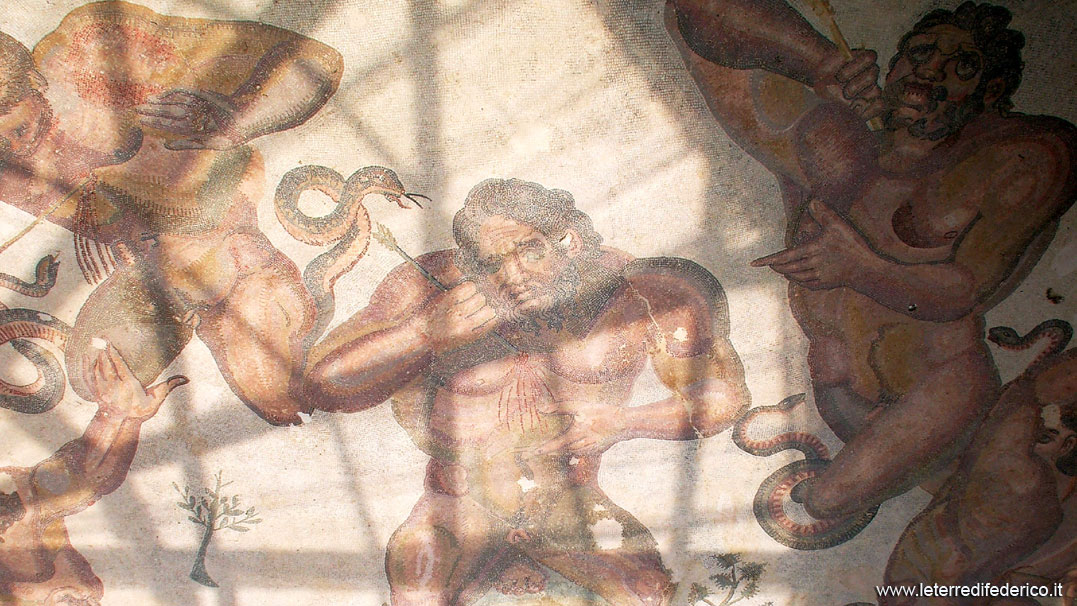 Tour guide to roman Villa del Casale, one of the richest, largest, and varied collections of Roman mosaics in the world UNESCO World Heritage Site. The mosaic and opus sectile floors cover some 3,500 sq metres and are almost unique in their excellent state of preservation

Discover one of the most beautiful Roman villas in the world
Visit the rooms of the villa and its wonderful mosaics
Explore the Great Hunt mosaic and the “bikini” mosaic, showing women playing sports.

Guided tour of the roman Villa Romana del Casale in Piazza Armerina town in Sicily, one of the most precious jewels left by the Roman civilization in Sicily.
The villa, built in the III-IV a.d. it probably belonged to Valerio Massimiano, a powerful patrician of the empire. Since 1997 it has become a UNESCO world heritage, especially for the beauty of its mosaics, famous all over the world.
Through these mosaics it is possible to relive the history of the greatest empire with scenes of daily life, depictions of heroes and deities, hunting scenes and games.
The domus with its 48 rooms is built around the quadrangular peristyle which is accessed from the vestibule. The peristyle floor is entirely mosaic with drawings of European and African animals while the garden is enriched by a large fountain composed of three pools, covered in marble on the outside and in mosaic inside.
From the peristyle you enter the Great Hall Corridor with two column apses with two female figures at the end that symbolize the two peripheral provinces of the empire.
Next to the corridor is the oval shaped triclinium (dining room), while along the sides of the peristyle there are some private rooms, some of which are reserved for domestic people.
The tour continues with the visit of the room with the ten girls in bikinis portrayed in various sports: throwing the disc, playing with the ball, exercises with weights and cross country and, later, the Basilica with the polychrome marble floors
To the left of the Basilica we will visit the room intended for the landlady: a bedroom with rectangular alcove and mosaic decorations depicting theatrical masks and the famous central medallion with lovers.
From the south-west corner of the quadrangular peristyle you can access the domus baths with the Frigidarium and the Tepidarium. The guided tour ends with the Circus Hall used as a gym with the mosaic of the room that reproduces the Circo Massimo of Rome.